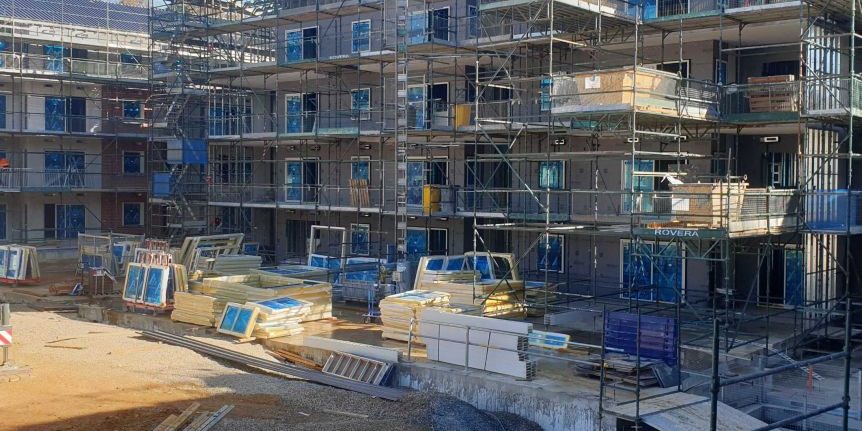 The nation’s largest community housing advocacy group is urging the Government to invest in more social housing not only to help those in need get a roof over their heads but also as a major boost to the economy during the COVID-19 recession.

PowerHousing’s research provided to 7.30 reveals that housing construction could drop by as much as 50 per cent from its recent peak in 2018.

That could see thousands of tradies and contractors without work.

“That’s a lot of people that won’t be called to quote on doing the plumbing or the plastering or the carpentry.

“Every new-build house has about 43 trades and sub-trades that get gainful employment.”

It is not just tradies but material suppliers, too.

Mr Proud said 5,000 bricks are used in the average home.

“The small economies around the country that rely on homes being built are very much understated,” he said.

From high-flyer to ‘I need help’

Mike Smith was once a federal government media adviser.

“I’m the last person you’d expect to see in social housing,” he said.

“I owned a property on an island in the Whitsundays. I owned a house on seven acres in central Victoria and apartment in Melbourne, sports cars and a share portfolio.”

“There I was with the employment minister in the Howard government launching the job network,” he said.

“Then years later, there I was lining up in the queue at Centrelink.

“I felt so ashamed. I felt like a failure.”

He now lives in subsidised community housing in Canberra.

Fighting back tears, he described getting the keys.

“For the first time, it felt like somebody or something believed in me, that I was worth another go,” he said.

He predicts the COVID-19 recession will only increase the numbers of people hoping to get into social housing.

“I think a lot of people are starting to realise that community support financially and housing is critical, because anything can happen.”

Even before the COVID-19 recession, 200,000 Australians were waiting for social housing, according to Australian Institute of Health and Welfare figures.

“The house is the founding block of someone’s life,” Mr Proud said.

“If you have a house, you have the basis of stability.”

There are now calls for the Federal Government to stimulate the economy through building more social housing to help slow a massive predicted drop-off in construction.

“Although the delivery and construction of social housing is a responsibility of state and territory governments, the Morrison Government is making significant, ongoing investments into social housing,” he said in a statement to 7.30.

“When you look at the whole multiplier effect of construction, it also means there’s less investment in the marketplace, there are less retail items being purchased and so forth,” he said.

“There is a demonstrated need to really start establishing more public housing in the sector.

“Of course, we’re seeing the HomeBuilders grant, which has some fairly strict eligibility requirements, which probably means it’s not going to be as effective as some of the other policies we’ve seen in the past.

“There is a demonstrated demand in that sector and an absolute under-build or under-servicing for those who are less than advantaged.”

Social housing can be life-changing

The majority of social housing residents are women and low-paid workers like Marlene Dankha.

“I work as a medical receptionist and I’ve been there almost 10 years now,” she said.

“I work hard but I don’t earn enough money for me to go and rent a market property.”

She and her 14-year-old son have moved into a community housing subsidised unit in a block of flats in Sydney’s west.

Before that, they were struggling in a granny flat.

“It was too small for a growing teenager,” Ms Dankha said.

“When I walked into this unit I said, wow. Look at it now — it’s amazing.

“It’s something I couldn’t believe and when she gave me the keys and said this is your home, I had tears in my eyes.

“I was crying. I couldn’t believe it.

“They gave me a home I look forward to when I finish work.”