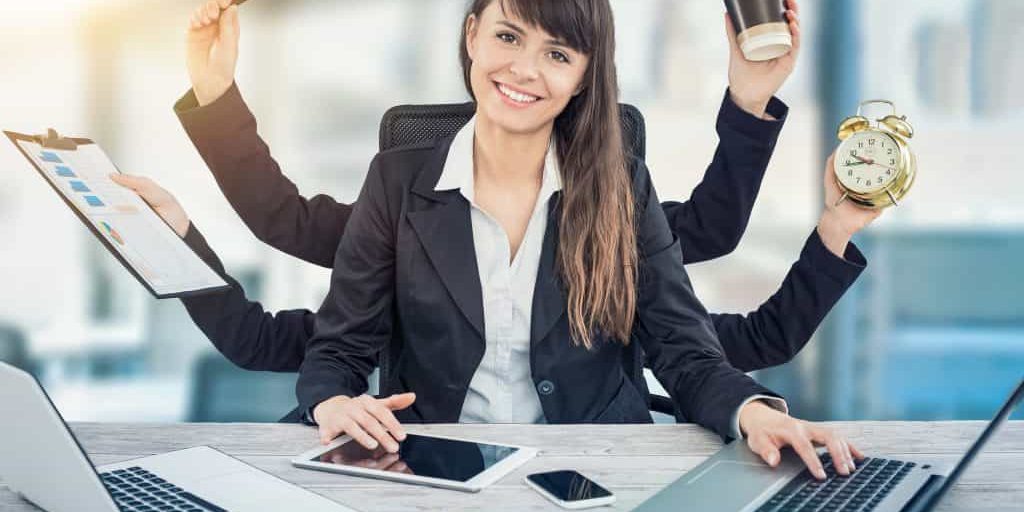 “There is only so much time in the day, but take that one step further and you begin to pay attention to ‘energy’ and where you are investing the most precious commodity of all. That is precisely why some of the most successful people in the world try ‘self-automation’, ensuring their decisions are best spent on what matters most.”

“I don’t want to make decisions about what I’m eating or wearing. Because I have too many other decisions to make.” — President Barack Obama

If you automate the small things in life (like choosing what you wear), you can focus on the bigger ones.

So, let’s start with wearing the same clothes every day… like these people:

These are just some of the expansive list of successful people who wear the same thing every day.

The Science behind wearing the same clothes every day

There’s a good reason for the strange behaviour of successful people. When challenged during an audience Q&A why he wears the same grey t-shirt every day, Facebook CEO Zuckerberg said…

“I really want to clear my life to make it so that I have to make as few decisions as possible about anything except how to best serve this community.”

President Obama only had 2 suit colours in his closet — grey or navy blue. Of this, he said,

“I don’t want to make decisions about what I’m eating or wearing. Because I have too many other decisions to make.”

Even small tasks cost us in willpower

You might not think it’s a big deal to choose your t-shirt in the morning but do that 100 or 1000 times and you start to get tired.

When you get tired, you capitulate and end up staring at pictures of cats on Facebook.

“No matter how rational and high-minded you try to be, you can’t make decision after decision without paying a biological price.” — John Tierney (New York Times).

So, what’s the answer?

Your ability to make a decision is what makes you more valuable than a machine.

Self-Automation is where the robot or bot takes over the low value tasks within a chain of events leaving you to focus on the high value ones.

Doubling down on what matters

Think of it as allowing you to “double down” on the high value stuff:

While you might think choosing tags are no big deal,it’s like Barack Obama’s suits again— one more decision that slows you down.

You see, all our decisions get considered equally. High value ones have to fight with low value ones regardless of their impact on our work.

Double down on the high value decision-making, automate the rest.

But, can’t you hire a VA in the Philippines to do all that…?

“Never delegate something that can be automated or streamlined. Otherwise, you waste someone else’s time instead of your own, which now wastes your hard-earned cash. How’s that for incentive to be effective and efficient?” — Tim Ferriss (The 4 Hour Work Week) 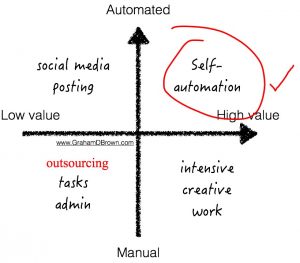 Self-Automation is far more effective than outsourcing because when you Outsource you still have to make low value decisions:

Sure, all these tasks may take up 1 or 2 hours maximum, but it’s Barack Obama’s suit again…

With Self-Automation just press a button.

Self-Automation is likedesigning a “best practises” for a particular task that you would outsource to a V.A (virtual assistant). But, rather than get the VA to do it, you get a robot (see my tools below) to look after it.

1) I get a heck of a lot more done without as much distraction. My head is clearer and I guess that makes me happier in the long run.

2) I’m able to create a lot more higher quality content— like producing these podcast episodes. Instead of messing around with crafting tweets I’m able to produce content that lasts, content that makes a difference.

In building my own lifestyle business over the last 5 years and writing and researching productivity, routines and Deep Work for my book, I’ve tested 100s if not 1000s of different apps, tools and tactics. I’ll share the tools and techniques I use for Self-Automation to beat Decision Fatigue below. For now, here are some examples of how I’m using it to become more effective and more creative:

Self Automation with Rituals

I explain my bot below…

What does my Self-Automation Bot do?

This is an example Zap that I built to automate the creation of my podcast. Of course, true to Self-Automation a human (me) still has to record the podcast.

NOTE: I used to have a step in this sequence where I’d send the video to a manual transcription service (REV) that would transcribe my work for $1 a minute. That’s pretty cool especially when Zapier can take the deliverable from REV and add it to your post automatically!

It’s a 20+ step bot on Zapier. There’s a lot going on, I explain how some of this works in my latest podcast: LEP#3 Decision Fatigue

Here are the tools you’ll need to build a Self-Automation bot like the one I just described:

Social media scheduler – http://www.bufferapp.com (not necessary but helps with checking your work and testing)

So, what’s the result?

I can record a podcast at 8am and have the post, YouTube video, social media done by 8:45. Self-Automation has freed up my time to post this article on Medium today. This is just one of about 30 bots I’m using to Self-Automate. It’s all work-in-progress.

It’s not perfect, but I’m getting better.